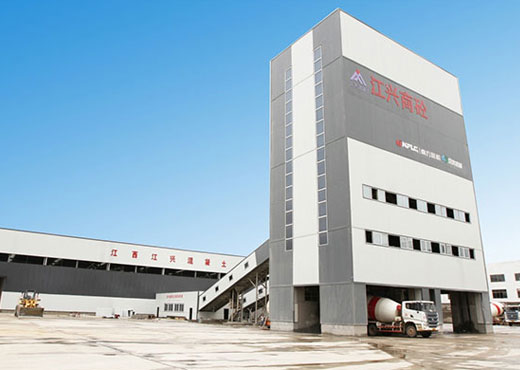 As a city of heavy industrial center, Tangshan has a serious environment problem due to the heavy haze in recently years, and the government is increasingly focus on the environment management, especially for the strict requirements on indexes on aspects of environment protection such as dust raise, noise, sewage and discharge, etc.

As the pollution such as powder, and noise, etc. in the mixing plant is relatively serious previously, Tangshan city gives a higher requirement of higher environment protection indexes on the newly built mixing plant. Completed in 2011, the newly built concrete mixing plant can fully reach the highest national standard with the advantages of no powder, no noise, and zero emission. After 3 years utilization, it is as fresh as a brand new one, which is the evidence of its environment protection effect.

Beside covering the main mixing building and stockyard, the high performance pulse dust remover are equipped on all the dust-raising spots such as the belt conveyor in the warehouse, the connecting parts of horizontal and inclined belt, transition bin of main building, etc., the strong dedusting, dust suckling functions can effectively control the dust emission of mixing plant.

Covering about 40 mu, the stockyard of the mixing station is equipped with aggregate spray system for the powder accumulated in the enclosed stockyard by NFLG, and the powder will be reduced by water mist spraying.

Water Spray in the Stockyard

In the preliminary phase of the construction of the station, NFLG take the function allocation of the site, reasonable planning of logistics and material flow, collection and utilization of rain, and the recycling and utilization of waste water and materials into consideration comprehensively to take advantage of every inch of land, save every drop of water, and save production cost for clients effectively, so as to satisfy the production demands in an easier way.

In the concrete production process, the waste concrete recycling system of NFLG will concentrate and treat the massive waste water and materials generated by device cleaning and site cleaning by separating and recycling the sand and slurry in the remained concrete, which will effectively avoid blocking the pipeline of slurry agitator, and clarify the slurry entered into the slurry agitator, to ensure the water quality for concrete production; on the other hand, the sand, after cleaning repeatedly by large volume main machine, will be recycled and adopted after stacking according to the category at the end by the vibrating screen, which will realize the complete circulation and utilization of sand, stone, and waste water, to realize a real zero emission.

Production with High Efficiency and Stability to Guarantee the Supply

Commercial concrete business, as its special characteristics, shall not be interrupted in the engineering construction process, which requires the continuity of concrete production of the mixing station. Tangshan Construction has 134 concrete delivery trucks, among which 110 trucks are mixer trucks, which is the evidence of the daily mixing amount of Tangshan Construction. NFLG has three concrete production lines, and its devices satisfy the massive amount of production mission of the mixing station on basis of its highly efficient production capacity and the stable and reliable quality, to guarantee the downstream supply. Mixing station of Tangshan Group can now produce 8000 to 10000 cubic meters. In October, 2014, the three stations produced about 240 thousand cubic meters, in only one month and NFLG mixing stations can reach the utilization requirements.

The highly precise measurement system of NFLG will weigh the concrete, powder materials, additives, and sands without any difference and effectively guarantee the quality and safety of concrete. The concrete of high quality and strong supply capacity establish good reputation for Tangshan Construction, which will made it keep a foothold in the market with fierce competition.